You Are Here: Home / Portfolio / Crane used in Tree surgery 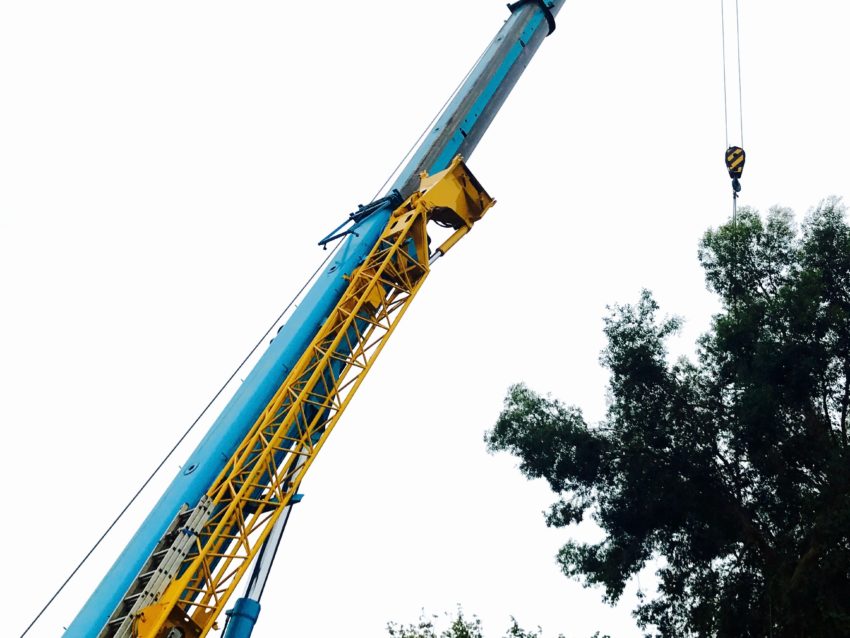 These jobs are few and far between and for a tree surgery company everyone involved really enjoys them. When a crane used in tree surgery it usually signifies something out of the ordinary is going to happen. It’s a totally different experience for the team, communications have to be tip top as any mis understandings can be fatal, the crane operator and his banks-men need to understand what branch is coming off next and where its going to go, the Arborist (in the tree) needs to know where the crane is going to move the cut branches to and the ground team need to be on top of their game also. They have to process the branches lowered to the ground quickly and efficiently as to cause no hold ups. Communication is key here, so walkie talkies were order of the day.

Possibly the most crucial part of the entire undertaking is the knowledge of the Arborist –  in the case Joe. He has to be able to estimate the weights of the branches before he cuts them as to not over load the crane. There”s a lot of pressure on the Arborist shoulders with a crane job!

Quite simply, the tree had become too large. It was causing issues for neighbours and was deemed a headache for both the owners and neighbours it’s structural stability was questionable also. We had to use the crane here as the tree was simply too far from the access point into the garden, luckily we could use a nearby car park and lift the branches over the wall of the owner’s garden, several other gardens and down into our processing area – the car park. We had liaised with the car park owners and shut it down for the duration of the contract. Naturally we had made the local council aware of our intentions as it was a tree within a Conservation area.

How did it go?

In short, very well indeed despite the horrendous weather. Each lift that the crane made came in at around the 1tonne mark and we had 20 or so lifts. Its was a BIG tree! Despite this the tree was down safely within the day. The following 2 days were spent clearing the site, removing the wood and all evidence of us having been on site.